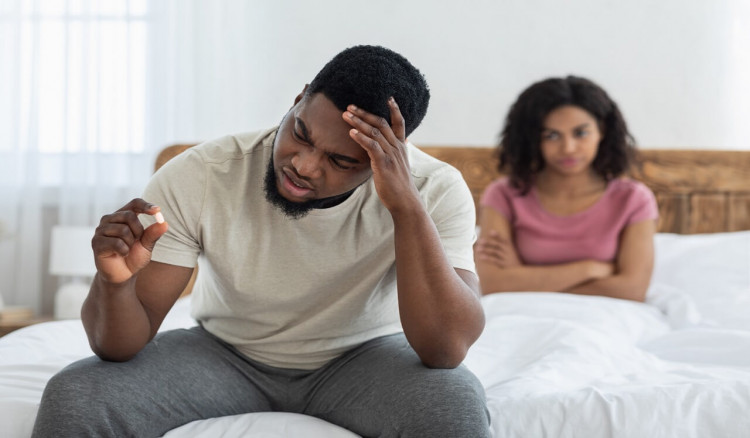 Premature ejaculation is a condition were when sexual activity is about to start, a man is so excited that he orgasms immediately upon beginning the sexual act.

Premature ejaculation is different from erectile dysfunction but they are connected. Erectile dysfunction is when a man cannot consistently maintain an erection long enough to have sexual intercourse. All men are bound to have problems maintaining a hard penis from time to time and the problem increases with age.

This unassuming little gland may be in the captain’s seat of male libido. This gland is the thyroid

The thyroid gland is an endocrine gland located at the base of the neck on both sides of the windpipe below the voice box.

The thyroid gland produces the hormone called Thyroxine, which regulates the speed of chemical reactions and influences the rate of growth and the development of sexual characteristics. The activity of the thyroid gland itself is regulated by a hormone secreted by the Pituitary Gland.

Thyroxine contains iodine, and the thyroid gland cannot produce thyroxine unless you eat a diet that contains a small amount of iodine. These hormones circulate and control the metabolic rate of cells. Thyroid problems can affect every part of the body because thyroid hormones affect every cell.

Researchers recently conducted a review of the best studies looking at thyroid function in relation to sexual dysfunction.

They found a clear relationship between thyroid problems and sexual dysfunction -- including penile limpness and premature ejaculation.

These researchers carried out the study at the Baylor College of Medicine in Houston, Texas and published their results in Sexual Medicine Review.

Sexual dysfunction is a widespread problem. According to research, it may affect more than 50% of men.

A number of studies have looked into the effect of thyroid hormones on sexual function.

“The effect of thyroid hormone derangement has been of recent interest.”

This study looked at the relationship between thyroid hormones and sexual dysfunction in both men and women.

The researchers collected information from some of the best studies on the subject.

Literature was reviewed to examine the effects of hypo- and hyperthyroidism on sexual function.

While hyperthyroidism refers to excess production of thyroxine. People with this condition are nervous, irritable and suffer from insomnia. Heat makes them very uncomfortable. The excess secretion of thyroxine also produces heart palpitations that people frequently mistake for a true cardiac attack. Another symptom is loss of weight—in spite of the increased hunger that usually accompanies this illness. When severe, hyperthyroidism often causes the eye to protrude or bulge.

For many years the only treatment for hyperthyroidism was surgery, in which up to 90 percent of the gland was removed. Today, combination of drugs can help control excessively active thyroid hormone production or where necessary, radioactive iodine can be used to lessen activity of the gland or make it completely inactive.

The most widely used test to determine thyroid function is the PBI (protein-bound iodine) test. This is a laboratory test for which a small sample of a person’s blood is required.

Another test involves measuring the rate at which the body uses oxygen. In another test, the amount of iodine taken up by the thyroid gland is measured by administering radioactive iodine

The result of this scientific research showed that men with either abnormally high or low levels of thyroid hormones suffered more sexual dysfunction.

“In both men with hyper- and hypothyroidism, treating the thyroid disorder at least partially reverses sexual dysfunction.”

The balance of evidence shows that thyroid problems can cause sexual problems for men.

“Evidence suggests a reversibility of sexual dysfunction with correction of thyroid dysfunction.”

The researchers are not exactly sure how or why this happens.

This means it is a much simpler problem to fix than if it were related to the antibodies.

“Current evidence supports thyroid derangements rather than autoantibodies as the causative factor in men.”

Doctors often only do a rudimentary examination that looks at the TSH (thyroid stimulating hormone) levels.

It is important that the thyroid hormone levels are properly tested too because just doing the TSH levels sometimes does not give accurate results.

A full thyroid hormone panel should also include T3, T4, and reverse T3. For some people, diet and lifestyle changes can improve thyroid function. Other people need treatments from their doctor.

Certain diet and lifestyle changes can be adopted to boost your thyroid function and overcome premature ejaculation.

With regards to lifestyle and diet changes, the aim is for you to have sufficient nutrients that improve body functions and to reduce the level of stress you go through.

You must also be actively reducing your stress levels. Stress induces a hormone in the body called cortisol

Testosterone and cortisol are crucial hormones for men. A little cortisol in the body is good but too much cortisol creates problems for the body.

Higher levels of cortisol are associated with abdominal obesity, type 2 diabetes, and all manner of other chronic illnesses.

In almost every case, men should aim for a higher testosterone to cortisol ratio.

One of the factors that affects this ratio is diet.

You might think that a diet higher in protein would be better because it can help you build muscle.

But research has shown that a high-carbohydrate diet is better for testosterone and cortisol levels.

They are protein, carbohydrate, and fat.

This study looked at the effect of two of these micronutrients (protein and carbohydrate) on the hormones testosterone and cortisol.

“The aim of this study was to determine if a change in protein/carbohydrate ratio influences plasma steroid hormone concentrations.”

“…seven men between 22 and 43 years of age, all of whom were normal by clinical laboratory tests, volunteered for this study.”

All of the participants went through two different experiments.

The only difference between the experiments was the amount of carbohydrate and protein in their diets.

The first diet was a high-protein diet where 44% of the calories came from protein.

For the second diet, they reduced the protein to 10% and increased the carbohydrate content to 70%.

The diets were designed so that they would both be identical in terms of caloric intake and the amount of fat.

“The diets were equal in total calories and fat.”

The men were put on each diet for 10 days.

At the end of the 10-day diet experiment, the researchers took blood every two hours for 12 hours -- testing for testosterone and cortisol levels over the course of the day.

Testosterone was much higher after the high-carbohydrate diet.

Average testosterone levels on the high-protein diet were 371.

The average testosterone level increased to 468 on the high-carbohydrate diet.

The researchers found even greater improvements in cortisol levels. Cortisol was much lower on the high-carbohydrate diet compared to the high-protein diet.

The average cortisol level with the high-protein diet was 10.6. It dropped down to 7.7 on the high-carb diet.

When calories remain the same, the high-carbohydrate diet had much better effects on hormones than the high-protein diet.

“These consistent and reciprocal changes suggest that the ratio of protein to carbohydrate in the human diet is an important regulatory factor for steroid hormone plasma levels.”

To improve your testosterone to cortisol level, get healthy carbohydrates into your body from food sources like corn, rice, banana, sweet potatoes etc.

Low testosterone and high cortisol are identified in many of the chronic diseases that affect men. Going with the dietary research recommendation shown above, you can achieve a better testosterone to cortisol level in your body.

To further improve this ratio, you can take steps to boost your testosterone levels higher.

And to boost your testosterone levels, you need a critical dietary nutrient called Magnesium

Magnesium is even proven to increase testosterone.

In fact, there are quite a few studies looking at the effect of magnesium on testosterone in men…

But most of these studies are on young guys.

One study looked at the relationship between magnesium and testosterone in older men.

And that study shows that the relationship between magnesium and testosterone does not depend on age.

These researchers did human research at the Department of Internal Medicine and Biomedical Sciences, University of Parma, in Italy. The International Journal of Andrology published the results.

The average level of testosterone declines with age.

And lower levels of testosterone increase the risk of disease and sexual problems.

“The age-associated decline of testosterone is a strong predictor of metabolic syndrome, diabetes, and mortality in older men.”

We know from previous research that magnesium can boost testosterone levels in young men.

But there is very little research on magnesium and testosterone in older men.

“No study has investigated the relationship between magnesium levels and testosterone in older populations.”

This study investigated the effect of dietary magnesium on testosterone levels in older men.

The researchers used information from a study of 399 men over the age of 65. This was part of a larger study that took place in Italy.

The researchers used this data set because it had information on both testosterone levels and magnesium.

“We evaluated 399 ≥65-year-old men in a study population with complete data on testosterone and serum magnesium levels.”

The researchers used statistical analysis to understand the relationship between magnesium and testosterone levels.

The average age of the study participants was 74 years old.

The data proved an association between higher magnesium levels and higher testosterone in older men.

And the researchers performed another statistical analysis.

In this calculation, they took into account many other factors that could affect testosterone levels.

The secondary analysis also showed a very strong correlation between testosterone and magnesium.

“After further adjustment [for a variety of factors], the relationship between magnesium and total testosterone remained strong and highly significant.”

The study shows that magnesium is very likely to increase testosterone levels in men of all ages.

Magnesium is also associated with another hormone called IGF-I.

And both IGF-I and testosterone increase muscle mass…

They are anabolic hormones.

“In a cohort of older men, magnesium levels are strongly and independently associated with the anabolic hormones testosterone and IGF-1.”

But it is also partly determined by magnesium status.

“In older persons, serum magnesium concentration is an independent correlate of muscle performance.”

The researchers called for further investigation into the topic. They want to see research that looks at the effect of magnesium supplementation in older men.

“There is a need for longitudinal and intervention studies to assess whether magnesium supplementation is a valid strategy to slow down the decline in anabolic hormones observed in older men.”

We already know our bodies need it for hundreds of different processes.

Supplemental magnesium is regarded as very safe for most people. Short-term gastrointestinal upset is the most common side effect of too much magnesium.

You can get magnesium in your diet by eating leafy greens, bananas, some fish, avocados, and dark chocolate -- among other yummy foods.

Effect of Thyroid Hormone Derangements on Sexual Function in Men and Women by Bates JN, Kohn TP and Pastuszak AW