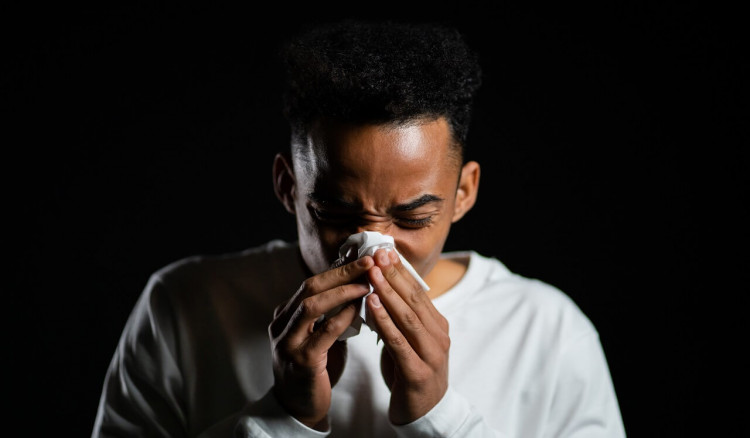 An allergy is an unusual or exaggerated reaction to a substance most people find harmless. Allergens—the substances causing the reaction—abound. Sensitive people may be affected by the food they eat, the air they breathe, their pets, their clothing, the climate, sunlight, moisture—the list is practically endless.

The allergic response is believed to be a case of mistaken identity. When an allergen contacts or enters the body, most people don’t react to it. They may not be conscious of breathing the pollen dust of trees, plants and weeds, but that same dust will cause misery for the hay fever sufferer.

When the pollen comes in contact with the mucous membranes, the body will mistake it for an invading enemy, just as it does bacteria. It will set about sending large quantities of mucus to the ‘invasion site’ and this will clog the sinuses, stuff the nose and possibly produce a sore throat. Antibodies will rush to the area, the sneeze mechanism may be activated and the tear duct may work overtime to wash the pollen from the eyes.

It is a false alarm, but the body is unaware of that, so the sensitive person suffers. If particularly susceptible to hay fever, she will have only a few weeks to recuperate during the summer before the country air is laden with ragweed pollen and once again her body begins ‘defending’ itself.

Eventually, hay fever victim may develop nasal polyps, growth blocking the nasal cavity, and she may also suffer asthma. Those are serious problems and asthma particularly can be life-threatening.

The only truly satisfactory solution for the hay fever sufferer is to relocate to an area where pollen doesn’t exist. An allergist can give advice in helping to choose the right location.

It has been said, ‘the skin is the mirror of the body’s health,’ and that is particularly true regarding allergies. Whether you are allergic to certain foods (strawberries, dairy products, eggs and chocolate are among the more common), plants (poison ivy, oak, sumac), wool, synthetic fabrics, medicines, or a host of additional substances, the chances are good that the symptoms will include a skin reaction. One common response is the white fluid-containing blisters that produce violent itching—a condition known as hives. Emotional turmoil can also cause hives.

Among the most dangerous allergies is that to penicillin, experienced by 5 to 10 percent of those who receive the drug. The body reacts violently; sometimes the more common allergic symptoms are followed by a severe drop in blood pressure, coma and possibly death.

Doctors call this potentially fatal response anaphylactic shock, and penicillin is not the only drug which can cause it in susceptible people. Other drugs causing severe allergic reactions include sulfa compounds, tetracyclines, insulin, local anestheticis, tranquilizers and even aspirin.

Those allergic to insect bites should carry a special medical kit containing adrenaline and antihistamine at all time. If a kit is not available and a sensitive person suffers an insect bi, a tourniquet should be promptly applied between the bite and the heart to prevent an allergen from circulating throughout the body. Then the victim should be rushed to the nearest hospital.

Allergies are medicine’s great imposters. Sometime they are mistaken for a common cold, but in addition to puffy eyes, runny nose and a multitude of aches and pains, they can often mimic specific diseases.

Because allergens often produce skin reactions along with other symptoms, your doctor can often determine whether or not you are suffering from an allergy, and what is producing it. She will perform what is known as a patch test, applying a series of common allergens to your skin. If a rash develops, he knows he has found the culprit.

What to do if you have an allergy

If you have an allergy, you should take the following steps:

1.See a doctor, the sooner the better. Allergies very seldom vanish by themselves. Most often they get worse

2. Keep in good health. Get plenty of rest and fresh air, and maintain a balanced diet. This will help you to avoid infectious diseases that may make you more susceptible to nose and bronchial allergies

3. Avoid tensions and emotional disturbances. We don’t know the exact connection between allergies and emotions, but we know that a relationship does exist between them

4. Remember, you can become allergic to practically anything. Even if the cause of your allergy has been discovered, don’t assume you need to look for a different allergen if your attack returns

5. Take special precautions if you have an allergy, however trivial. Make sure you are tested before taking medicines, vaccines or serums. You might have a serious reaction to a medicine.

If allergic attacks are severe, you should carry a card stating clearly what you are allergic to (for example, insect stings), followed by instructions from your doctor saying what should be done for you. Tell people about your allergy whenever it is necessary. Do not be sensitive about your sensitivity!