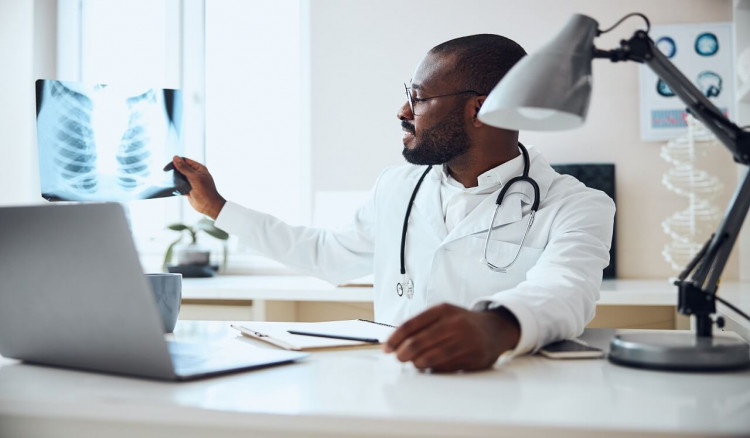 Your very life depends on your lungs. If the average person were to stop breathing for more than four minutes, his brain would be irreparably damaged. Your two lungs have 300 million air sacs, each with its cobweb of blood vessels through which red blood cells pass single file to discharge carbon dioxide and pick up oxygen.

The lungs are subject to dangerous infections such as pneumonia, tuberculosis and influenza, and to chronic, obstructive pulmonary diseases such as emphysema, chronic bronchitis and asthma

Pneumonia is an infection of the lungs caused by a large variety of germs. There are three general kinds: bacterial, viral and mycoplasmal—their names reveal the type of infecting germ. Prompt medical care is essential because pneumonia is one of humanity’s oldest killers. Antibiotics are effective against bacterial and myoplasmal pneumonia, but not against viral pneumonia. Victims generally develop coughs, fever and chills. Always call the doctor, for though pneumonia is no longer fatal for one out of four victims as it once was, it still kills over 0000 people each year.

One of the most common disabling diseases of the respiratory tract is emphysema. In recent years, deaths from emphysema have almost triple; over 500,000 people now die from it annually. It commonly strikes men between the ages of 50 and 70. A high percentage of its victims have long been heavy smokers, and they frequently live in places where air pollution is a problem.

Emphysema sufferers often have a long-standing history of coughs and shortness of breath after physical exertion. As the disease develops, just walking or carrying out common activities causes breathing difficulties, finally reaching the point where every breath demands hard effort.

Inside the lungs the walls of the tiny air sacs, the alveoli, stretch and finally rupture; the cobweb of blood vessels in the walls of some air sacs may disappear, leaving less contact between blood and air—thus making the exchange of carbon dioxide for oxygen much more difficult.

Its actual cause is unknown, but it is thought that emphysema is often a later result of chronic infection or irritation of the bronchial tubes, which connect the windpipe with the lungs. Although, there is no absolutely known preventive, it is generally believed that smoking should be avoided.

Today, doctors can give emphysema sufferers some relief and improve their lung function. Early recognition and treatment of the disease are essential for emphysema can eventually lead to heart failure.

Modern sanatoriums, by providing specialized care and isolating tubercular patients who might otherwise spread the infection, have been an important factor in reducing the incidence of the disease. Antibiotics and chemotherapy have been very helpful as well. The widespread use of chest X rays and the tuberculin test to identify the disease have also helped.

An estimated 10 million people today have live tubercle bacillus germs in their bodies. Tuberculosis is most likely to be found among people with inadequate nutrition who live under crowded, generally poor conditions.

Another serious disease, chronic bronchitis, affects over 5 million people annually and costs some thousands of people their lives. It causes coughing and spitting up of heavy mucus, or phlegm. Three-fourths of its victims are men, and the disease is likely to start in middle age. The initial bronchial irritation may begin with a bacterial infection, infected tonsils, or some other disease. But the most common causes of the irritation are heavy smoking and air pollution. Chronic bronchitis has often led to emphysema. Prompt medical care is essential.

The ‘flu’ is a highly infectious disease of the respiratory system. The tissues swell, become inflamed, and may even crack, causing nasal or throat discharges to be streaked with blood, and this may spread to the lungs. Although the tissues do heal in a week or two, they are then susceptible to other types of infection, particularly in the lungs. Medical care should be sought when you come down with the flu because it may prove fatal. However, modern vaccinations, have been about 70 percent effective in preventing this debilitating disease.

The following precautions will help you avoid catching influenza:

Don’t count on being immune from the flu because you have recovered from an attack. It is true that temporary immunity does follow the flu, but there are a number of different strains of the virus, and having had one kind does not protect you from another. Vaccines give protection for some months, but only against certain influenza viruses.

Outbreak of Mycoplasmal Round Pneumonia in an Adult Population: A Case Series by Wei Liu, Wen Wen et al

Continuing Challenges in Influenza by Robert Webster and Elena Govorkova